Do you know how much whole grain needs to be in your breakfast cereal, bread or crispbread for it to be considered high in whole grain or very high in whole grain? Like all Australians, you can be forgiven for not knowing this as there is currently no regulation for the use of whole grain ingredient content claims to describe the different amount of whole grain in different foods. However, with the development of the Code of Practice for Whole Grain Ingredient Content Claims clarity for consumers around the labels and advertising of the whole grain content of foods is on the horizon.

Developed by the Grains & Legumes Nutrition CouncilTM (GLNC) – the independent authority on the nutrition and health benefits of grains and legumes in Australia and New Zealand – the voluntary Code of Practice for Whole Grain Ingredient Content Claims (the Code), for the first time sets a standard for labelling of whole grain foods, which vary widely in whole grain content.

Under the new Code, from 2014 consumers will begin to see consistent messages for the whole grain ingredient content of foods on food packaging and advertising. According to GLNC Managing Director, Georgie Aley, “ the new standard is being welcomed by the food industry, and will help consumers to identify whole grain foods which can help them meet the recommended amount of whole grain each day.”

While an increased emphasis has been placed on whole grain foods in the revised Australian Dietary Guidelines, GLNC consumption study data from 2009 and 2011 confirms that Australians aren’t eating enough whole grain foods. In fact, whole grain food intake decreased by around 20% during this time, which may be attributed in part to mixed messages about whole grain foods, which can create confusion among consumers. 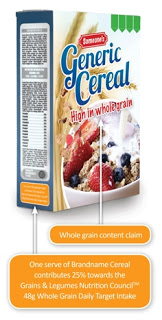 The whole grain ingredient content claim was developed through consultation with the public health and nutrition research community, as well as the food industry based on scientific rationale. If you are interested in the evidence underpinning the code here is a summary from the recent DAA National Conference.

As well as setting a standard by which food manufacturers can demonstrate the whole grain content of their foods to consumers, the new Code also enables manufacturers’ claims relating to high fibre grains or legume foods to be certified by GLNC, and permits on-pack use of GLNC’s certification statement and logo by registered users. Ms Aley said, “This additional certification will highlight healthier product choices for consumers within the grains and legumes category, and bring greater understanding about the value of enjoying grain foods three to four times a day, and legumes at least two to three times a week.”